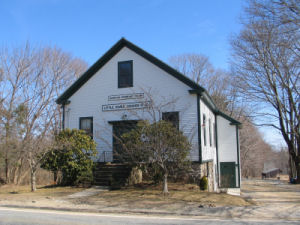 The Hampton Community Center is located in the renovated "Little River Grange" building at 178 Main Street in Hampton. The building was donated to the town in 2003 and renovated in 2007-8 using funding from a STEAP grant.

Renting the Community Center for your function or group

If you are interested in renting the Community Center at the Little River Grange, CLICK HERE for detailed information.
Please click on dates on the Community Calendar to ensure the date(s) you have in mind are available. Once you have reviwed the information and are ready to rent the facility, please e-mail the Administrative Assistant at adminasst@hamptonct.org or call 860-455-9132 Ext. 2 to confirm date availability and to hold the space.
You can also follow this link to go to the Recreation and Community Activities Commission page for more information regarding recreational activities.

History of the Little River Grange

Hampton’s Little River Grange was founded 1885. The Grange Hall was in operation from 1906-2003.
Read more about the National Grange Movement & Organization  and about the Connecticut State Grange Movement.
Growing up With the Grange in Hampton Memories
Walt Stone: We used to square dance there every Saturday night. Most of the time I walked to and from the grange, four and a half miles. Walked home at midnight and got up at 4 o’clock in the morning to milk the cows.
Peggy Hoffman: The times I remember most were right after World War II. We used to have some great programs. A lot of work went into those programs. Everyone participated. There were competitions, and whist parties, and fairs, and very large meetings. Those were the years that stand out in my memory. We had a good time.
Henry Moon: We put on a lot of plays. In one I remember "Murder in the Light House” Marguitte was the one who was murdered. The light house was a pail with a lantern on top. Bob McDermott (senior) let us borrow the Hampton Hill Garage carts, the ones that go under the cars, for a stretcher. We ran around that light house nine times with that stretcher. People provided sound effects. Storms, wind. I remember "Murder in the Barber Shop”, too. We used catsup for the cut throat. There was catsup all over the place. We used to do a lot of that stuff in the old days. We had contests, people with glasses versus people without glasses, people living east of Route 97 versus people living west of 97. The Grange brought everyone out. We used to know everyone back then.
Pearl Scarpino: Little River Grange Hall sits empty now, but I remember when it was THE action center of the community. Neither of the town’s churches had large halls as they do today. So many a wedding reception was held in the Grange Hall after the ceremony, including my own. There were weekly whist parties at the Grange enjoyed by the adults, and regularly scheduled square dances for the young and young at heart. Many different groups hired the hall for their activities. A drama club put on plays and local music groups put on concerts. The Grange itself put on suppers or chicken barbecues. It was a busy place. During the World War II years particularly, the building saw heavy use. With gas rationing, residents couldn’t buy pleasure gas to go out of town, so business boomed for local facilities. Times have changed, and with change, use of the Grange Hall declined. It was the end of an era, but an era that created fond memories for my generation.
Minnie Halbach: Those were the good old days. There were all sorts of things at the Grange. My son John won the State Prince title. My oldest son Adolph was elected the National Prince of the Grange in 1968. He was the only one who came back with the title.
Peggy Fox: I remember our competitive programs. We divided the Grange members according to the alphabet, gender, all sorts of ways. Once we had a fashion show. The men were all dressed as women. I remember Jim Rodriquez (senior) sprawled on a settee dressed in pink satin. My father was dressed in a suit, and my mother nearly fainted when he came out in heels and a purse. We had women’s degree teams when we took on new members. Dorothy Holt had a lot to do with that. We all wore long black skirts and white blouses and had parts to say. Walt Stecko who was Chief of the State Police taught us how to march. The ceremony was preliminary to new members joining.
Dale Pearl Demontigny: My parents were there all the time. I remember as a young child going to the grange for whist parties. I had no idea how to play, but I would walk around with a little hole punch and punch the holes in a piece of paper. Every year my mother did a report and sent it to the state grange level, what people in the town did, volunteer hours, what they sponsored, two boxes worth of documents we gave to the Historical Society. My parents did the chicken barbecue for 40 years. Many members of the Pearl family were Grange masters. I remember the fairs and the entries- flowers, sewing, baking, art. There were many performers. I remember Fred Curry, Bert Inman, Don Widerman and Don Hoffman and their barber shop quartet.
Claire Winters: My mother played whist every week there. She wouldn’t have missed those whist parties for all the world.
Photos

Photo: 95th Anniversary, group shot Front row: Joyce Pearl Rodriguez, Simone Fuller, Mal McKinnon, Sue Emmons Gray
Second row: Bill Pearl, George Fuller, Alma Pearl Palmer, Austin Emmons, Don Hoffman
Back row: [unidentified], Arthur Pearl, Adolph Halbach Jr. All photos are from the Killingly History Center collections, where the Grange folks deposited their records when they dissolved.
New Use as Community Center
In 2002 the Little River Grange chapter donated their grange building to the town, with two conditions: its new use as a community center, and preservation of the "Little River Grange No. 36" sign on the front of the building. At a Town Meeting in February 2003, resdients voted to accept the gift and the conditions. In 2005, the Board of Selectmen appointed a committee of citizens to seek grants for renovations and to supervise the work: Juan Arriola, Robert Burgoyne, Everett Hyde, Robert Johnson, and Gay Wagner (chair), who were assisted by Dan and Diane Meade, Susan Hochstetter, and Randy Thompson. In 2006 the state awarded a $299,000 STEAP grant which paid for 100% of the work. The building was formally rededicated as a community center on Memorial Day, May 2008.
Hampton Community Center has no upcoming meetings
View All Meetings, Minutes and Agendas